It’s winter time in the PNW and many of the trails are closed, impassable due to feet of snow, or shut down for the wildlife. Perfect time to catch up on some mods, repairs and upgrades.

First, and most importantly, my very good bud Tony (OB #0814) welded some cracked sheet metal that supports the radiator. These cracks had been giving me tons of concern since it was obvious that the whole support structure was moving around, as evidenced by the very loud rattling when travelling uphill on washboard dirt tracks. These rattles have been happening over the past two years and have been getting louder and more ‘brittle’ sounding as time went on. It took me that long to zero in on these cracks as the source of the rattles since I was unable to recreate the rattle sound when the rig was stationary. It was only by dumb luck that another friend of mine noticed the cracks and we recreated the rattle by holding a section of the sheet metal while I actuated the shocks.

Another concern was one of my front tires felt as if it was bouncing when at speed. This was pretty new issue and I had a general idea for what was causing it. Taking the rig back to Discount Tire, where I had purchased these steel wheels and BFG KO2’s, I had them re-balance all the wheels and rotate them. This took care of the issue. I’m still uncertain if the root cause is that these wheels were made imperfectly, (steelies often are more imbalanced right from the factory versus aluminum alloy wheels), or if Discount Tire mounted them incorrectly. 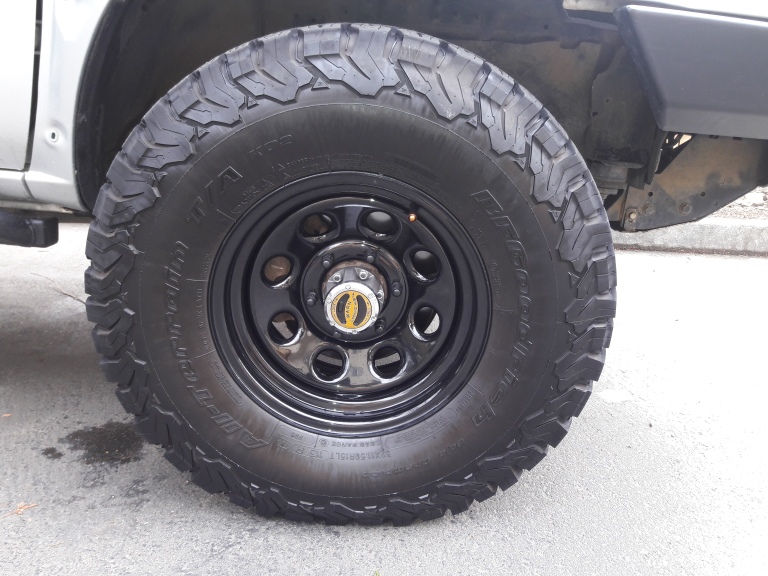 After watching Ronnie Dahl’s video below on the differences between steelies and alloys wheels, (with tips on how to mount them correctly), I suspect they were not mounted right.

Another repair that was long in coming was the installation of replacement upper control arm ball joints on my Calmini UCA’s. Calmini has earned itself a very tainted reputation over the past few years so it was surprising that when I called them and inquired about replacement ball joints, they instead gave me the manufacturers part numbers (MOOG K9022). As an upgrade, I opted for the ball joints with the grease zerk.

Installing these ball joints was very easy and straightforward. Remove tire, use a BFH, (big effing hammer), to separate the ball joint from the control arm, remove ball joint bolts, and voila! they were replaced.

There are a few other big tasks that need to be done on the rig; things like replacing both sides inner CV axle boots, they are torn open. Tracing down the cause of the AC compressor continuing to cycle long after it’s been turned off. Which may or may not be related to my gas mileage falling by about 3-4 mpg.

Winter has come early this year to the PNW and it’s been dipping down to around freezing for weeks now. It’s more difficult to get these projects completed without a garage to work in with these temperatures but regardless, they really should be completed before I head out to the mountains again, for reliability, longevity and safeties sake.

If you’ve been doing some winter upgrades and repairs this winter to your overland vehicle, I’d like to hear what you’re working on. What have you done to your rig lately?